The award ceremonies for the LT100 are on the Sunday morning after the race, starting at 7:30am. We set our alarm for 6am to have a chance for breakfast and start re-packing Clifford.

We joined our teammates and our most wonderful crew members at the award ceremony and after receiving our buckles we had one more chance to record a team moment before everyone headed off in their various directions.
Our plan for the day was to pick up Bruno from Breckenridge adventure camp and then head over Hoosier Pass one more time to camp in the Salida area on Sunday night.
Picking up Bruno was exciting for us, spending three days away from him had seemed like an eternity!
We arrived in Salida area and found a wonderful quiet camping spot on the Arkansas River at Brown’s Canyon. The landscape in this area was very different from the Leadville or Breckenridge area, almost desert like. 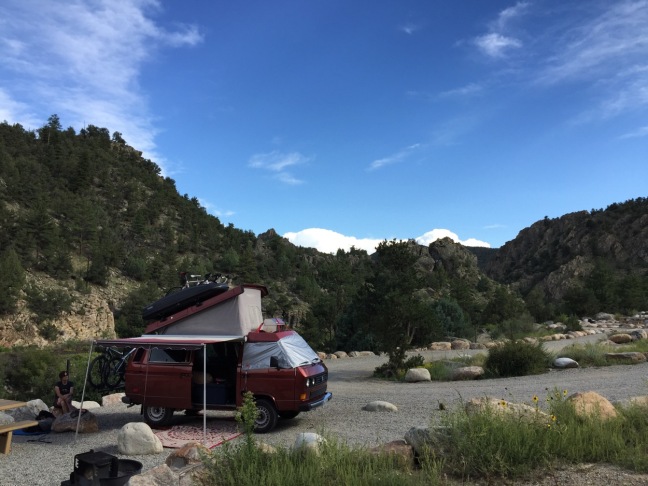 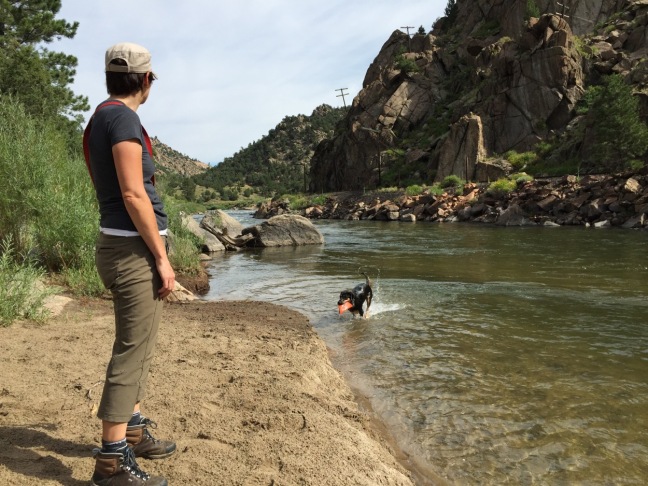 In fact, we found our first cacti of the trip here.

It was a beautiful sunny day, in fact it was scorching hot. If our vehicle was modern, I could tell you what the temperature was, but the only digital numerical display Clifford has is his clock. Let’s just say it seems desert scorching hot. At least until the late afternoon thunderstorms brought hail and rain upon us.
The next morning we drove into Salida, a quaint town that appeared to have lots of character without the touristyness of many Colorado towns. Here we found Bruno a Ruffwear Front Range Harness, our current last hope of reducing his tendency to pull when on leash without resorting to a halti harness. Bruno was possibly less excited than we were about our purchase, but Robin and I were both optimistic within minutes of putting it into use.

After our stop in Salida, we pointed Clifford toward Gunnison, Crested Butte and Gothic Road. We had high hopes of the scenery and the trails our next destination would provide. Again, the drive provided scenery that ranged from beautiful to really stunning. The high plains around Gunnison had me looking for John Wayne and his men, riding their horses in search of the villains.
Crested Butte looked nice, but we pressed through toward our destination. The road climbed into Crested Butte Mountain, the resort centre built just north of the old town. Once we had passed the resorts, the perfectly smooth paved road turned to gravel. Clifford seems more in his element on the gravel back road than the four star resort road.
As we got further and further on Gothic Rod, the surface became more and more challenging. The potholes and general unevenness meant that we crawled along in first gear, for the tall load on Clifford require for us to be extra careful. Here we also encountered our first climb that required a second effort before we made it to the top.

Once we arrived in our planned camping area, we found the four official camp sites occupied. This was not a crisis, for dispersed camping with Clifford can be quite pleasant. We drive a short distance from the “campsite” down the rod and pulled in at a trailhead parking area, assessed it quickly and decided to make it our home for the next couple of days.
The beautiful warm sunny weather had followed us all day, but as we were setting up, the weather once again turned nasty. This thunderstorm was more intense than any we had experienced previously. The lighting and the thunder were intense enough that even Clifford was trembling. Once again, we encountered hail, this time in conjunction with high winds.

We bundled up inside Clifford and waited it out as evening turned into night the next morning would likely bring blue skies and sunshine. It is Colorado, after all.